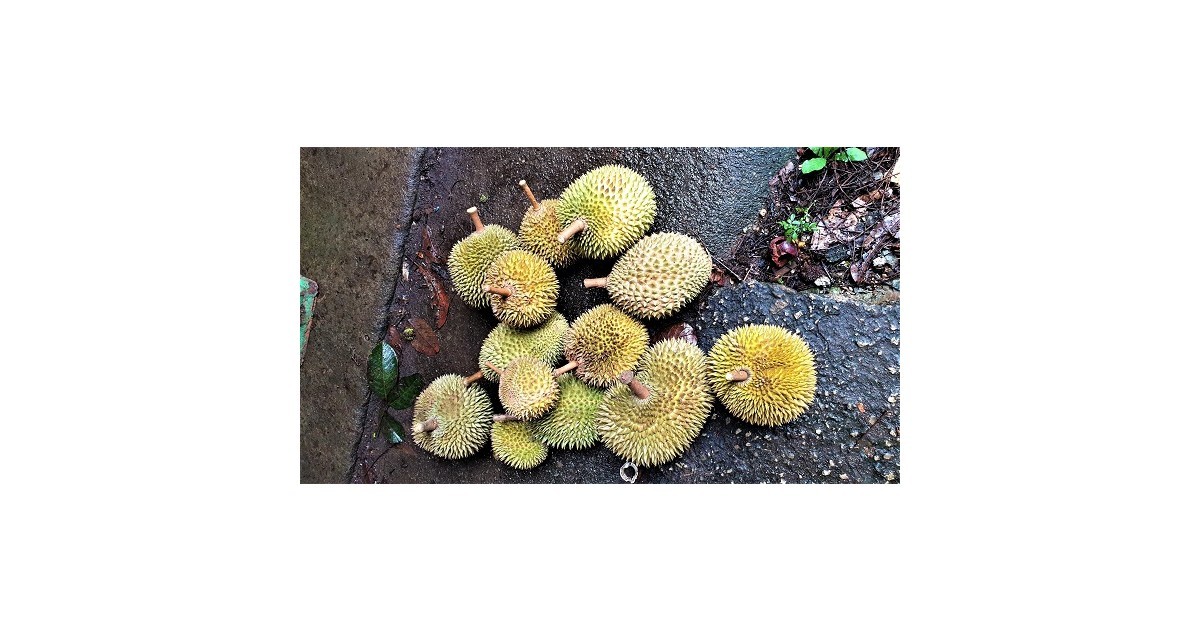 Review of Durians from the Golden Trio

The months of June and July are traditionally the durian season and all the fans of this king of fruits will be on a high, visiting their favourite durian stall to satisfy their craving. Here, most of our durians are from Malaysia and we are also very much familiar and accustomed to its breeds and taste.

To ride on the season fanatic wave, we had durian (active) trips to Malaysia since we started. This year when we learnt that there are durian plantations in nearby Batam island in Indonesia and Pulau Ubin (island) in Singapore. We decided to organise trips to savour the king of fruits from our own backyard and our immediate neighbour, Indonesia. Whether they are as good as the leader (from Malaysia), here’s our review.

Our first durian session began in Indonesia on the island of Batam. The trip was organised as a eat-and-shop getaway for our members to bond with their non-active family members or friends.

We arrived at the plantation and everyone put on some insect repellent before entering. It is a fruit farm so having mosquitoes and insects are common. As we walked into the farm, we could see durians hanging on the trees above us. And there were unripe rambutans too !

We were ushered to the shed with tables and chairs prepared, waiting for our arrival. Here, there are only good or bad durians. They are grown as any fruit, almost wild and organic. They are not categorised into breeds like those we are familiar with Malaysia durians. Instead, they all belong just 1 breed, known as kampung durians.

We settled down quickly around the tables and waited eagerly while the durian specialists got on to their job. They opened the durians so quickly that we cannot savour them fast enough ! It was a eat-all-you-can durian buffet, so everyone was very happy enjoy the king of fruits to their heart’s content.

The flesh of Indonesian durians is paler (cream colour) compared to their cousins from Malaysia which has been painstakingly “groomed”. We were able to eat a lot, a lot and a lot of them because each seed does not contain a lot of flesh. The seeds are larger. They were sweet with some of them carrying a tint of bittersweet taste. They are not as creamy and rich. It’s a trial and error affair as the durian specialists opened the durians because we did not know how good or bad they will be until we tasted it. Nevertheless, I reckon it’s a good harvesting this season. Most of them tasted good.

This Indonesian durian eating experience brought back many fond memories for some of us. It reminisced us of our childhood durian session where breeds of durians are rarely heard of. Large seeds of durians were normal, white flesh durians were common and eating good or bad durians were like a tikam-tikam (lucky draw) affair.

So did the folks enjoy the durians ? Seeing the above pictures, I guessed they did.  :))

If you are interested to give Indonesian durians a try, CHOPE your space HERE for 2020.

Shortly upon our return from Batam, we head to Pulau Ubin almost instantly. We acquainted with one of the villagers who reside on the island last year and it was Uncle who told us that durians on the island is good and organic. We have been waiting for this day for a long time !

Because the durians grow wild on the island, Uncle was not unable to give us a good indication when the durians will drop except between June and July. We can only wait “anxiously” for the good news. Finally, Uncle called and due to conflict of schedule and the short harvesting period, we had no choice but to settle for a weekday.

We are truly glad we made it. As we walked to Uncle’s residence, we saw many mainlanders, on bicycles and some even brought push trolleys, picking up durians on the island. We too, joined in the fun and gotten very excited when we heard “thud” sound in the forest here and there. We also managed to pick some sweet rambutans along the way.

Finally, we reach Uncle’s place and were thrilled to see Uncle’s had picked so many durians for us the night before. Before we could savour them, we need to prepare the king of fruits by giving them some good brushing. Then Uncle got into action opening the durians !

These locally grown and organic durians are delicious. Some tasted as good as those from Malaysia. We had so much durians that one of our members candidly remarked that he had his durian quota for this lifetime fulfilled that day.

In fact we had only 14 KG worth of durians and Uncle charged us a token sum for them. Frankly, the price we paid per person would only get us a few seeds of durians on the mainland. Some wondered why we paid for the durians since they belong to no one. Technically, all trees in Singapore belongs to the government including the fruits that the trees bore. Be it on the tree or on the ground. Uncle braved the danger of wild animals, durian falling on his head and hiked to forest that only the villagers know to pick up the durians late into the night. It is only right to support Uncle for his efforts. Well, Mabel helped to offset some cost with her labour. To be honest without him, we would not have the chance to savour Singapore durians so easily. We were truly grateful for the opportunity.

We regretted not bringing airtight containers to buy takeaway and had to sadly bid farewell to such good durians. Uncle promised us he will still pick durians for us next year if his health continues to permit him to do so.

If you are interested to try our local SG durians, CHOPE your space HERE for 2020.

Our last durian outing was to Tangkak, Johor Malaysia, where it is known for producing some of the best tasting durians! And oh boy, we were not disappointed!

We cycled to explore the town and countryside of Tangkak before settling down at the base of Mount Ophir to savour the king and queen of fruits.


The durians were freshly picked up in the morning, hence the durian uncle needed a special apparatus to open the shell as they are still too soft.


Inside each durian is perfection, from bitter creamy durians to sweet creamy ones. Each of their taste lingered in our mouth and made us crave more! But because they are so huge and ‘gao’, all of us were stuffed after eating a few seeds. We finally know what is the feeling of having durian hangovers, haha!

From Mao San Wang to Red Prawn to Black Gold, you name it, we tried it! In total, the uncle brought for us 80 KG (!) worth of durians. Needless say, we couldn’t finish them all, what a pity! There was a durian that came with a tinge of coffee flavour, which the durian uncle named it tiramisu durian. The taste is very subtle and unique.


Thankfully it was a cycling trip, so we can safely indulge in all the delicious durians as we will be burning off all the extra calories.

We were lucky too! Rambutans are in season and we got to taste some of the crunchiest and sweet farm grown rambutans plucked directly from the trees (with the permission of the local farmer of course).

If you are interested to try out Tangkak’s good quality durians, CHOPE your space HERE for 2020.